To be or not to be a Nuclear Weapon State

"As long as lions don't have their historians,
hunting stories will always glorify the hunters."
African proverb 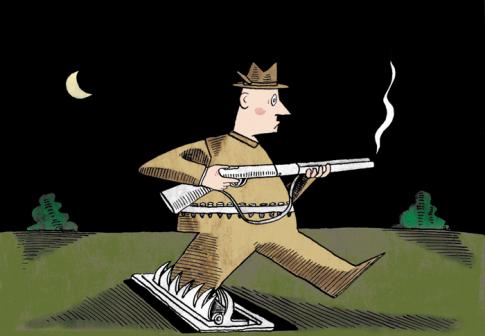 War in Mali in the background highlights the fact that some Nuclear Weapons States (NWS) live beyond their nuclear means. If France is playing beyond it's weight, it is feeling it now for the first time.

Since 1953, - with the support of socialists that became anti-bomb once De Gaulle came to power in 1958 -, France has embarked on the nuclear path.

This adventure came along with the notion of "weak-to-strong deterrence (dissuasion de faible au fort), introduced to justify the technological fix. With the intellectual contributions of people like general Gallois – a former colonel inspired by U.S. generals while he was working for SHAPE (1), France has campaigned for the concept of the equalizer power of the bomb ("le pouvoir égalisateur de l'atome"). In order to belong to the 'happy fews' to whom an historical accident has given this tremendous privilege (2), France paid a high price. Was it worth the sacrifices? The question is being raised now.
In the meantime, France has to come to terms with its nuclear ambitions. If France is the only country among the NWS to have closed down its test sites after signing and ratifying the Comprehensive Test Ban Treaty (CTBT), it waited until 2006 to recognize officially the consequences of their tests on the health of civilian, military, Polynesian and French victims. Now, Paris is left with heavy burdens.
Invoking financial problems to delay any clean-up, pleading not guilty for operations that were operated on other people's soils, French Minister of Defense has discovered in February 2011 that a crack up of the Moruroa atoll will result in a tsunami, as a consequence of 3,200 tons of radioactive waste that were dumped over the years off the coast of Moruroa and Hao. Bad news for the French elite, especially for those who pretend that military activities have no impact on the environment, although the "environmental time bomb" (3) constitutes one of the main threat to world security. Incidently, France is one of the very few NWS (with Israel) not to have signed of ratified ENMOD Convention.

The world has changed, indeed. Since the Fifties'. At that time, France made a proposal at the UN that an agreed percentage reduction be adopted by the so-called "developed countries" and that the resources saved – in accordance with article 26 of the U.N. Charter (4) be allocated to an international fund. This philosophy has gone, although the U.N. still refers to the action programme adopted at the 1987 international conference on Relationship between disarmament and development (boycotted at the time by the United States), initiated by president François Mitterrand in 1983. Over the years, France aligned itself with the U.K. and the U.S. to refuse a U.N. resolution trying to link disarmament and development. Though France in 2012 approved the resolution for the first time, it explained: The notion of a "symbiotic relationship" between disarmament and development appears questionable to us as the conditions conducive to disarmament are not necessarily dependent on development only, as seen with the growing military expenditure of the fastest developing countries. There is no automatic link between the two but rather a complex relationship that this notion does not accurately capture(5).
The notion of taxing the arms trade was taken up in August 2001 in France by Laurent Fabius, the then French Minister of Finance, now (2013) in charge of foreign affairs. More radical circles spawned the idea of a global "death tax" on those leading arms companies that made profits of more than $1 billion. But these ideas have been dropped.

France has a special record as much in the field of horizontal proliferation. That explains why it was the last of the 5 'official' NWS (even after China) to join the Non Proliferation Treaty (NPT), but, after the Iraqi First War, under U.S. pressure, Paris embraced 'non proliferation' with the enthusiasm of a new convert. This posture has been widely publicised. Within the National Assembly, the issue was squeezed: the only report related to weapons of mass destruction included 3 pages (out of 500) on Israel nuclear programme ! (6).
France joined the West to condemn India and Pakistan's entrance in the nuclear club. It has used the spacegoat of so-called "proliferators" (like Iran) in order to freeze its own disarmament programme. But at the same time, France discovers with some disappointment it has less leverage on the Iranian front for example that emerging powers like Brazil (allowed by the NPT to enrich uranium without any suspicion) or Turkïe.
This non-proliferation stance is nevertheless quite ambiguous: In order to pursue its nuclear programmes cost effectively, Paris has, by some hidden civilian doors, contributed to Japanese nuclear ambitions. Moreover, Paris is an advocate of concerted or "shared deterrence".

France tried to capitalize on the bomb by becoming more independent at a time when the world was divided into two blocs. Was It appropriate ? Now that the world witnesses new emerging powers, capable of challenging the strategic hegemony of the western world, one wonders if French politicians, so sensitive in the past about France's autonomy, are missing this reality; Or the boat of change. While NATO appears more and more "useless and damaging" as Regis Debray would describe it (7), Sarkozy prided himself on having reversed De Gaulle's decision in 1966, reintegrated France into NATO's military command in 2009, a step that Chirac had already prepared. France is now the third-largest contributor to the common budget funding Alliance operations, and it seems nearly impossible to reverse the trend. Bad timing indeed. Having tried to burry any autonomous European defence policy, NATO has drifted towards the Southern hemisphere (from the Sahara to Kaboul), forgetting the geographic boundaries of the 'North Atlantic'. Instead of supporting European allies including Germany that call for NATO nuclear bases's closure, France resists any denuclearization process of the continent. Identifying with the interest of the "western world", the newly elected socialist leaders seem proud, here again, to play according to U.S. games and launch a crusade against 'terrorism'. 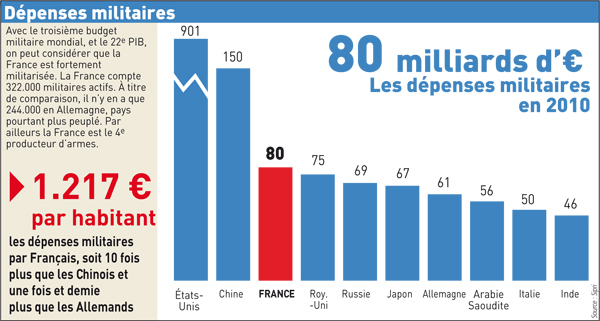 Those who swore by the "force de frappe" have been claiming that nuclear deterrence, far from being a weapon, would be a political tool useful to prevent war, reinforce security as an insurance policy and increase their diplomatic clout. Yet the track record of NWS in general and France in particular shows that States who are pursuing nuclear ambitions have no intention of giving up their conventional weaponry—whether or not with the prospect of waging conventional wars or low-intensity conflicts. In a country that devoted 50% of its investments to nuclear forces forty years ago, the arsenal has not decreased France's addiction to foreign interventionism. According to an official study issued by the French Ministry of Defence, Paris intervened militarily in 28 countries since 1963 and is still present in 38 of them. But does France have the financial means to play both cards ? This question was raised when Washington tried to counter French nuclear flirt. According to General Valentin, Henry Kissinger told him in 1960: You will not manage to have an operational atomic weapon, you will not have the money to do it and technically You are not capable of doing it. (8). Today, pro-NATO voices are saying that Europe's shrinking military budgets are related to the "vanity projects" represented by the money poured into two nuclear deterrents, the U.K. and France. According to National Assembly Defence Commission, the total cost of French military deployment around the globe increased by 20 % between 2007 and 2008 to reach $1.3 billion. What next ? If France's military budget was comparable to the one of China and Russia in the mid 90's, that is not the case anymore. Today, France's military budget is one fourth of Chinese' budget and half on Russian defence budget. So, taugh choices will have to be made. In the context of France's identity crisis. And the French public will have the opportunity to intervene, thanks to the fact that France belongs to the only three (out of nine) NWS who actually provide figures for their nuclear expenditures (even if they are debatable).

As the population wishes to see its government prioritize domestic spending in difficult times, the current financial crisis could lead to a mobilization of the people against military spending. Can France afford to spend one third of its military budget on nuclear deterrence ? It is the only NWS that deployed land-based nuclear systems and then decided to give them up totally. Can it go any further?
Some French officials like Hervé Morin (9) and other personalities favoring the "global zero" option, as Air Force general Bernard Norlain, consider that scrapping the air component is a must ; and that the missiles embarked on Mirage and Rafale aircrafts should be abandoned. But these savings – amounting to U.$ 2,6 billion over the next 15 years - are 'peanuts' in comparison with the U$ 29 billion devoted over the next years just for the new generation submarines (SSBN) and their missiles. Among the other options, reducing the number of SSBN (from 4 to 3) might come up, but in that case, some experts predict that this would jeopardize French overall doctrine, if only because it would be the end of one French SSBN at sea at all time.

While France might boycott the Oslo summit (March 2013) to discuss the humanitarian consequences of nuclear weaponry, the newly appointed head of the Ministry of Foreign Affairs's think tank, the CAPS has a new challenge : how can France proceed to keep a permanent seat at the U.N. Security Council although it acquired that seat without the bomb ?