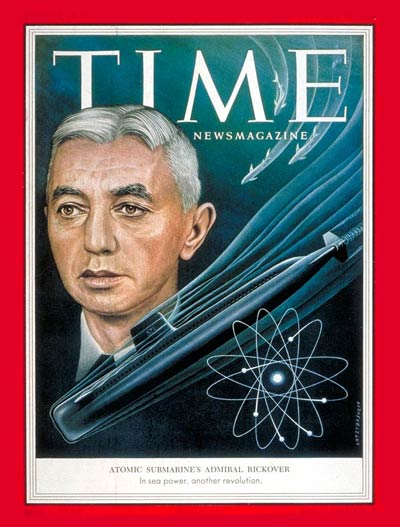 we must expect, if another war - a serious war - breaks out, we will use nuclear energy in some form. That's due to the imperfection of human beings.
Q. What do you think is the prospect, then, of nuclear war?
A. I think we will probably destroy ourselves, so what difference will it make? Some new species will come up that might be wiser. We think we are wise because we have –
Q. With that knowledge, it would seem to me that we could control, limit, reduce nuclear weapons. Everybody loses.
A. I think from a long-range standpoint - I'm talking about humanity -the most important thing we could do is start in having an international meeting where we first outlaw nuclear weapons to start with, then we outlaw nuclear reactors, too.
Q. Do you think that's realistic in a world with the Soviet Union?
A. I don't know. You're asking me to think as a person who probably knows more about this and has thought more about it than anybody in the world. I'm trying to give you - and I think I have a reasonable mind and I can think these things through and I understand what humanity is all about and the part that human beings play on this earth. I do not believe in divine intercession. I think we are making our own bed, and we have to lie in it.
Q. So you think if we have the commitment, we can limit and reduce our arms?
A. Yes. I remember the 1921 Disarmament Conference.That's the one Charles Evans went to. The United States called that conference and it came to very significant results. There was an arms race going on. England and France and Italy were building a lot of ships and we were building a lot and it was decided and it worked and resulted in the limitation of arms. The treaty expired in 1935.
I think it would be the finest thing in the world for the President of the United States to initiate immediately another disarmament conference where we at least stop that. It can be done. They did it then. They did it for a period of 15 years. It expired in 1935, and then by that time Hitler had come to power in Germany and there was no choice of continuing it. Had it not been for him, probably the disarmament would have gone on and decreased the amount of armaments even more. But I think this is a very propitious time, when the military expenses are eating up so much money and it's completely unproductive, and using so much of the people's taxes. I think this is a fine thing for the President to do and I urge you, in your capacity as a Senator, to try to do so and make me a member of it. I'll do something. Put me in charge of it, and I'll get you some results.

I think we are spending too much. I think we should be more selective in our spending. There are certain areas where it's obvious the danger is going to come if it does come. I think we should concentrate on that. But when anyone has a large establishment, when it's in business, it's self-limiting because you stop making profit, but in government there's no such limitation, and there is no good scrutiny going on.

Consider the situation. The Defense Department, on the military side, they change jobs every two years, the top people. On the civilian side, they generally come in without experience. So you have sort of two groups constantly rotating and nobody ever gets time to find out what's really going on. Therefore, it has to depend on its supporters. I think considerable money could be saved in the Defense Department. I think there are areas to cut down. I don't want to get into details here, but you can imagine that I've thought about this for many years.For example, take the number of nuclear submarines. I'll hit right close to home. I see no reason why we have to have just as many as the Russians do. At a certain point you get where it's sufficient. What's the difference whether we have 100 nuclear submarines or 200? I don't see what difference it makes. You can sink everything on the oceans several times over with the number we have and so can they. That's the point I'm making.
There's got to be some judgment used and these are very expensive things. They take up a lot of time and money and taxpayers' money too. I'm not giving you any party line. I believe you asked me for what I personally believe.

A preoccupation with the so-called bottom line of profit and loss statements, coupled with a lust for expansion, is creating an environment in which fewer businessmen honor traditional values; where responsibility is increasingly disassociated from the the exercise of power; where skill in financial manipulation is valued more than actual knowledge and experience in the business; where attention and effort is directed mostly to short-term considerations, regardless of longer-range consequences.
Political and economic power is increasingly being concentrated among a few large corporations and their officers - power they can apply against society, government and individuals. Through their control of vast resources, these large corporations have become, in effect, another branch of government. They often exercise the power of government, but without the checks and balances inherent in our democratic system.
With their ability to dispense money, officials of large corporations may often exercise greater power to influence society than elected or appointed government officials - but without assuming any of the responsibilities and without being subject to public scrutiny. Woodrow Wilson warned that economic concentration could ''give to a few men a control over the economic life of the country which they might abuse to the undoing of millions of men.'' His stated purposes was: ''to square every process of our national life again with the standards we so proudly set up at the beginning and have always carried in our hearts.'' His comments are ‘a propos’ today.

Adm. Hyman G. Rickover, the controversial 'father of the nuclear navy.'
testifying before the Joint Economic Committee of Congress in his farewell appearance before his retirement June 1982