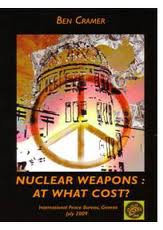 The present nuclear powers decry and protest when other nations threaten to produce these weapons, but do little to end their own status while, as Cramer shows, they cover up their own nuclear activities. Cramer goes back to Hiroshima and Nagasaki to start his chapter on the price of producing nuclear weapons. He also writes authoritatively on the many related costs to society and nature of the madness of nuclear militarization from testing to mining to all levels of production and storage – and the ever present risk of accidents which do happen – not all of them can be covered up. His description of the little known USA military base on Diego Garcia in the Chagos Islands in the Indian Ocean and the struggle of the expelled residents to regain their ´stolen nation´ (as John Pilger calls it) is essential reading.
The whole book is filled with information making important connections to all levels of understanding nuclear armaments; Cramer also provides useful appendices on acronyms, print and web bibliographies and a list of 44 more possible nuclear nations – as if the list of rogues we now have is not enough terrifying enough.
No major politician is showing any leadership in any global peace initiative; it is clear that for over sixty–four years, it is the millions of citizens who organize and support peace groups that give the real leadership on this vital issue, making this study and its distribution possible. Cramer shows that nuclear weapons are a key part of USA and other nuclear nations´ foreign policy and the financial burden is carried by the growing number of poor in every nation.
As I write this the Copenhagen conference on Climate Change ends with the spectacle of politicians backtracking and denying while they accuse each other. Nuclear power, whose generation and production is tied to the production of nuclear weapons with many of the same health and environment dangers, is actually being promoted as ´clean energy´.
Other authors have written extensively about the immorality, political, health and ecological results of nuclear weapons. Rosalie Bertell´s Planet Earth: the latest weapon of world is a profound analysis and call for action on these issues. It is an essential companion for the appreciation of Cramer´s documentation.
Cramer has provided an excellent analysis of the aspects that many see as important – financial spending and its results. He quotes Elizabeth Skons of SIPRI (Stockholm International Peace Research Institute) – one of the world´s most respected groups on this subject on the gap between military budgets and the alleviation of poverty and economic development.
"And certainly, one does not need to be a rocket scientist to realize that issues such as poverty, climate change and the ensuing scarcity of water and food, as well as the depletion of natural resources, are very likely to trigger violent conflicts if global effort fail to mobilize and overcome these threats."
Activists know this and have worked for decades on not only the moral and human necessity for nuclear disarmament, but in the effort to reach others and those in power, we also try to create awareness of the terrible financial cost of nuclear weapons. Cramer´s book is an important research and action reference, giving gravitas and authenticity to our campaigns and presentations. We may have decades more of work ahead of us but Cramer has given us both facts and explanations as well as further incentive to strengthen our work as peace activists before something terrible happens and an incalculable cost is extracted from the world and all life on it.
He says about this looming danger, "One only needs to fear that politicians and technocrats at the head of these complexes, whose power is proportional to the resources devoted to the semi–sacred bomb, might just be tempted one day, if the worst comes to the worst, to justify making the mother of all "bangs". ....if they were to argue that the amount of money invested was not merely intended for the sake of nuclear possession...One only needs to hope that a better question will be recalled: nuclear weapons–at what cost?

"Military spending cannot buy a country´s peace and security. Governments eventually come to admit that, even in purely economic terms..."