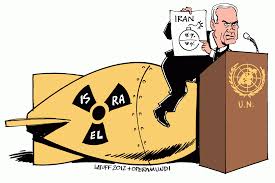 Most important, when asked whether it would be better for both Israel and Iran to have the bomb, or for neither to have it, 65 % of Israeli Jews said neither. And a remarkable 64 % favored the idea of a nuclear-free zone, even when it was explained that this would mean Israel giving up its nuclear weapons. The Israeli public also seems willing to move away from a secretive nuclear policy toward greater openness about Israel's nuclear facilities. Sixty percent (60%) of respondents favored "a system of full international inspections" of all nuclear facilities, including Israel's and Iran's, as a step toward regional disarmament.
If Israel's nuclear program were to become part of the equation, it would be a game-changer. Iran has until now effectively accused the West of employing a double standard because it does not demand Israeli disarmament, earning it many fans across the Arab world. 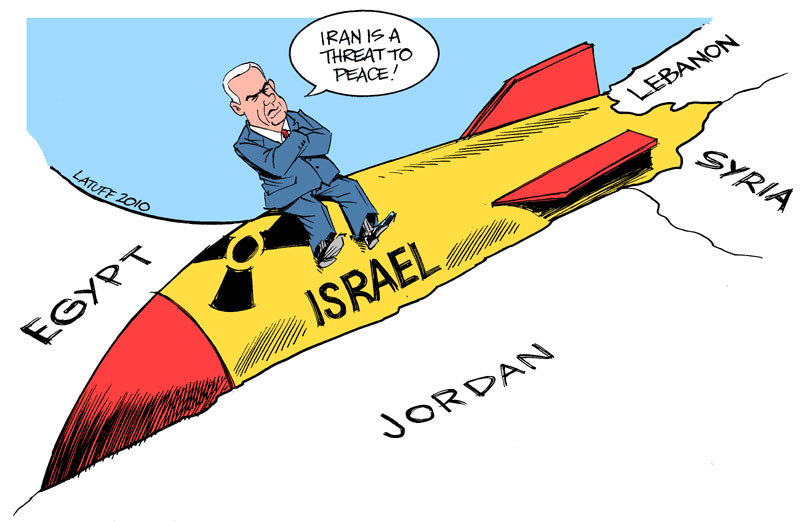 And a nuclear-free zone may be hard for Iran to refuse. Iranian diplomats have said they would be open to an intrusive role for the United Nations if it accepted Iran's right to enrich uranium for energy production - not to the higher levels necessary for weapons. And a 2007 poll by the Program on International Policy Attitudes found that the Iranian people would favor such a deal.
We cannot take what Iranian officials say at face value, but an international push for a nuclear-free Middle East would publicly test them. And most Arab leaders would rather not start down the nuclear path - a real risk if Iran gets the bomb - and have therefore welcomed the proposal of a nuclear-free zone.
Some Israeli officials may also take the idea seriously. As Avner Cohen's recent book "The Worst-Kept Secret" shows, Israel's policy of "opacity" - not acknowledging having nuclear weapons while letting everyone know it does - has existed since 1969, but is now becoming outdated. Indeed, no one outside Israel today sees any ambiguity about the fact that Israel possesses a large nuclear arsenal.
Although Israeli leaders have in the past expressed openness to the idea of a nuclear-free zone, they have always insisted that there must first be peace between Israel and its neighbors.
But the stalemate with Iran could actually delay or prevent peace in the region. As the former Israeli spy chief, Meir Dagan, argued earlier, Israel's current stance might actually accelerate Iran's quest for nuclear weapons and encourage Arab states to follow suit. Moreover, talk of an "existential threat" projects Israel as weak, hurts its morale, and reduces its foreign policy options. This helps explain why three leading Israeli security experts - the Mossad chief, Tamir Pardo, a former Mossad chief, Efraim Halevy, and a former military chief of staff, Dan Halutz - all recently declared that a nuclear Iran would not pose an ‘existential threat’ to Israel.
While full elimination of nuclear weapons is improbable without peace, starting the inevitably long and arduous process of negotiations toward that end is vital. Given that Israelis overwhelmingly believe that Iran is on its way to acquiring nuclear weapons and several security experts have begun to question current policy, there is now an opportunity for a genuine debate on the real choices: relying on cold-war-style "mutual assured destruction" once Iran develops nuclear weapons or pursuing a path toward a nuclear-weapons-free Middle East, with a chance that Iran - and Arabs - will never develop the bomb at all.
There should be no illusions that successfully negotiating a path toward regional nuclear disarmament will be easy. But the mere conversation could transform a debate that at present is stuck between two undesirable options: an Iranian bomb or war.

Shibley Telhami is a professor of government at the University of Maryland and a senior fellow at the Brookings Institution. Steven Kull is director of the Program on International Policy Attitudes.