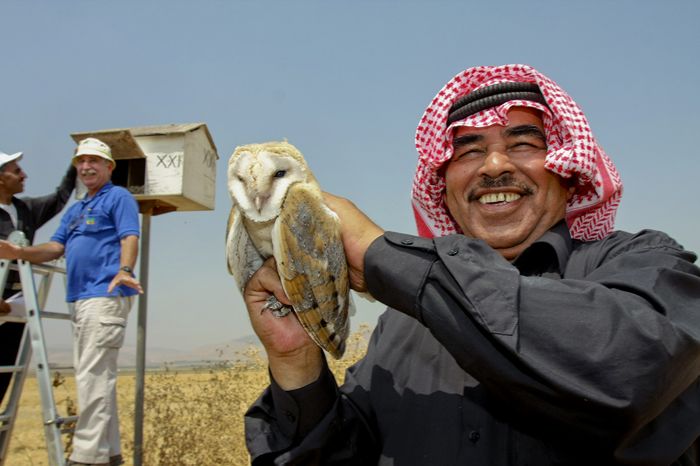 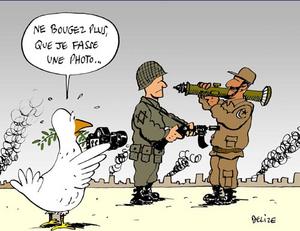 As both species make their nests in cavities, either natural or manmade, they constitute perfect candidates for populating the nest boxes specifically erected for this purpose – 3,000 in Israel and 220 each in Jordan and the Palestinian Authority. Demonstrating the success of this project, farmers decreased the spread of pesticides without compromising crop production, the barn owl population size increased, and, since 2002, Israelis, Jordanians, and Palestinians regularly exchange experience during joint seminars. The project has continued without a break, even during the periods of conflict in the region. A central component of the project is ecological education for farmers and their children, with documents prepared for the Jewish and Arabic communities in Hebrew and Arabic . The study of owls raises public awareness about ecology and the interconnectivity between world regions. Because barn owls know no boundaries, owls breeding in Israel hunt rodents not only in this country but also in Jordan and the Palestinian Authority, the reverse also being true with owls from the Palestinian Authority or Jordan hunting in Israel. Another symbol of interconnectivity is the finding of mixed couples comprising one owl born in Israel and another born in Jordan.
Nature conservation projects can also be integrated with popular leisure and sport activities. During the so-called ‘Crane Race’, groups of runners from Israel, Jordan, and the Palestinian Authority run around Agamon Hula Lake. Because 35,000 common cranes (Grus grus) winter there, this leisure project raises awareness about nature while promoting cooperation between the different communities.
Conservation and art can be also a source of inspiration to protect the environment. In 2017, artists from the region and worldwide will come together to paint the Dead Sea region to raise awareness of the importance of protecting this unique habitat and its wildlife. 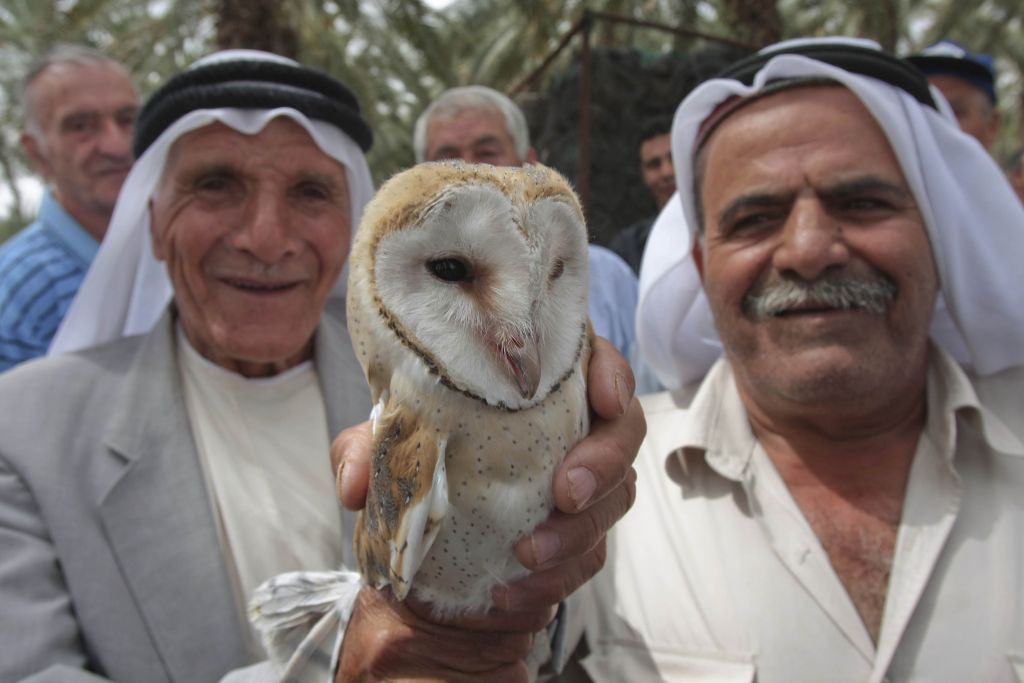 Local actors participating in cross-border cooperation projects need to unite highprofile partners to promote impact. The spirit of a project, and of its initiators, is decisive in convincing politicians and decision makers to finance and develop new projects. National leaders are particularly sensitive to economically sustainable concepts, such as ecotourism, that increase regional reputation and give opportunities to build new contacts with neighboring countries. That local and national projects permit the building of a strong web of relationships among local partners, schools, and farmers from the different regions involved is likely to galvanize further interest. By integrating the needs of national leaders, scientists can substantially increase the impact of cooperation around nature conservation. The involvement of governmental interest can favor the long-lasting success of joint projects between nature conservation and peacebuilding [Mackelworth, P. 2012). In the Middle East, local cooperation around nature conservation projects started to interest politicians and other members of society, including those interested in peace processes, such as Shimon Peres.

The 1994 Peace Treaty between Israel and Jordan was instrumental in this respect. It resulted in several crossborder environmental projects aimed at creating shared opportunity for ecotourism and the promotion of natural heritage across territories. This includes the Red Sea Marine Peace Park between Israel and Jordan, which promotes cooperation between the countries to protect the transboundary coral reefs. In this context, generals from Jordan (Mansour Abu Rashid) and Israel (Baruch Spiegel) who participated in the peace negotiations realized the power of nature for peacebuilding and became strong advocators of nature conservation. While conflicts, they can also play central roles in peacebuilding and can help motivate societies to take responsibility for their environment.
Nature around the border of a conflict divide offers the possibility of promoting collaboration between different armies. This is a highly symbolic undertaking and we successfully convinced the Israeli and Jordanian armies, which were previously fighting against each other, to promote nature protection. An example of cooperation following the Israel–Jordan Peace Treaty is the preservation of many bunkers abandoned along the border, which provide a suitable habitat for twelve species of bats, some rare and endangered (such as the trident bat Asellia tridens, Geoffroy’s horseshoe bat Rhinolophus clivosus, and the Egyptian mouse-tailed bat (Rhinopoma cystops). Today, the Israeli and Jordanian armies are working hand in hand to conserve the bats by adding bat-gripping areas to the ceilings.

Despite its immense cultural and natural richness, the Middle East is often not the first destination of tourists. Decisionmakers are thus interested in initiatives promoting alternative images of the region. To promote ecotourism a network of 15 birding centers has been deployed throughout Israel, enabling teachers to receive professional guidance in ecology and natural history. The ultimate aim is to create similar centers in Jordan and the Palestinian Authority to offer tourists the possibility of enjoying nature across the three regions. Tourism can serve as a tool to connect local people and help sustain sites of international importance. In the Hula Valley, the 35 000 wintering common cranes are fed 7 tons of corn daily to keep them from damaging the crops in the surrounding agricultural fields. About half a million people visit this site each year from October to March, channeling an income of US$25 million annually to surrounding villages. Similar projects should be developed in Jordan and other countries in the Middle East where many marshes have been dried out.

International: From Cooperation to Peacebuilding 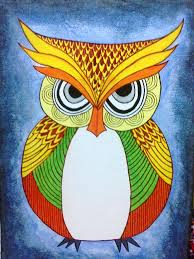 A proposition emanating from one side of the border can be viewed as an intolerable intrusion by people from the other side of the border, although local cooperation can be built and attitudes towards other groups can evolve. The involvement of third parties as peacemakers, such as neutral countries, international NGOs, or institutions, can play an important role in this process [Halevy, N. and Halali, E. (2015)]. They can help to organize international support, raise funds, and increase the prestige of local projects. It is therefore of critical importance to advertise internationally the success of cooperation between countries in conflict around nature conservation projects to promote the spread of new initiatives. Because of a shared concern for both environmental and peacebuilding beyond political divides, they can harness the support of international leaders.
The cooperation of local stakeholders through conservation projects can stimulate cooperation among politicians for conflict resolution which the international community should support and raise awareness of. We started to advertise the projects performed in theMiddle East on the international scene. As on the regional level in the Middle East, convincing influential political figures was key to success. We therefore started in Switzerland, where Philippe Roch, a well-known politician strongly involved in nature conservation, opened doors of key institutions. His support was instrumental in presenting the cooperation projects at the Geneva Peace Week in 2015, followed by an event at the World Economic Forum in Davos under the auspices of Shimon Peres in 2016. We also met key actors from the Swiss government to obtain support from the Geneva Centre for Security Policy, former chief of staff of the Swiss Army Christophe Keckeis  and diplomats. From Switzerland the next steps will be to unite other countries around this project. The next ambitious step is using regional cooperation to pave the way for the signing of a peace treaty.